AGAINST ALL ODDS - FROM THE RUSSIAN FRONT TO FREEDOM IN IRELAND 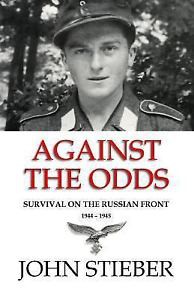 "AGAINST THE ODDS" is a story that seems too incredible to have been real. But as the saying goes: Truth is often stranger than fiction. And so, it was with John Stieber, who, along with his older sister Erika, had been born in Czechoslovakia, the son of an engineer who had served bravely in the Austro-Hungarian Army during the First World War. Stieber's father, owing to his engineering expertise, was given an opportunity to work in England during the mid-1920s. As a result, Stieber's family lived in England for several years. Stieber himself states that English came to be his first language, though both his parents were native German speakers. (Both Stieber and his sister would acquire fluency in both languages, which later proved advantageous to them during the early postwar years.)

Stieber's father completed his contract and returned to Czechoslovakia in the early 1930s. Stieber struggled to learn Czech in school and admits that he didn't enjoy his time in school there very much. His time in Czechoslovakia proved to be brief, because his father's employer had another job assignment for him to undertake, this one in Ireland. Stieber came to love Ireland and would live there for about 6 years. Sometime in 1939, his parents decided to enroll both Stieber and his sister into secondary school in Germany. With war being declared in September, Stieber and his sister would be stuck in Germany for the duration. (Their parents remained in Ireland, which they later made their home.)

After Stieber completed his studies, he was called up to serve in an anti-aircraft battery in 1943. He also served in the National Labor Service (Arbeitsdienst). Early in the following year, age 18, Stieber entered military service with the Fallschirm-Panzerkorps Hermann Göring and is sent to the Russian Front, where over the next year, he has many harrowing experiences and escapes death on several occasions. Indeed, Stieber would emerge from the war as one of the few men in his unit to survive and avoid being placed in a POW camp.

I very much enjoyed reading this memoir, which I highly recommend to anyone who loves human interest stories.