WELCOME TO THE WORLD OF THE INCREDIBLE JOSEPHINE BAKER 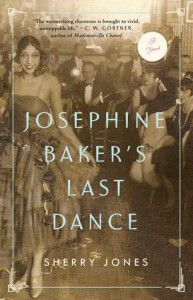 Josephine Baker is someone I had known about since my elementary school days in the mid-1970s, when I first saw her profile in a calendar celebrating what was then Black History Month. I was fascinated to learn that she had gone to Paris in 1925 and made herself into a superstar in France and across the world.

"JOSEPHINE BAKER'S LAST DANCE" was given to me last month as a Christmas gift. The essence of the novel has as a centerpiece, what was Josephine Baker's last great stage performance in Paris in April 1975. The author uses it as a springboard to take the reader back to Josephine's early years in St. Louis, where she was born in poverty in 1906. I very much enjoyed seeing Josephine as she grew and matured. Hers was not an easy life. There is much in the novel that conveys the struggles and abuse that she endured. America was then an unwelcoming and at times, brutal and dispiriting place for its black citizens. Baker gets into vaudeville as a dancer in her mid-teens and eventually, the gateway to stardom opens and Josephine arrives in Paris with La Revue Nègre .

The only part of the novel I found fault was its description of Josephine Baker's service in World War II as an intelligence agent and member of the French Resistance. The time sequences which covered the early war years seemed at times nebulous and compressed. If the reader had little or no knowledge of how the French defeat to Nazi Germany impacted the country in June 1940, he/she would be led to think that the resistance movement to the Germans developed overnight. That was not true at all. There was, initially disillusionment and fear when the Germans entered Paris - which had been declared an open city by the French government - on June 14, 1940 - and compelled the French to sign an armistice 8 days later. It would be several months to a year before an incipient resistance movement began to take shape in France as the Germans solidified their power and authority there.

There was also a mention in the novel which indicated that Josephine Baker made the acquaintance of the courageous British spy Krystna Skarbek, a Pole (aka 'Christine Granville') during the early days of the German Occupation. That is simply untrue. (I read a book in 2015 about Krystyna Skabek's wartime service --- 'Christine: SOE Agent & Churchill's Favourite Spy'. Krystyna Shabek did not get to France until the summer of 1944. Earlier, she had been engaged in espionage work since late 1939 in German-occupied Poland, the Balkans, and Egypt.) That is why I am taking away 1 star and giving "JOSEPHINE BAKER'S LAST DANCE" 3 stars.  Outside of that glaring, historical inaccuracy, it is a very good novel which brought out the real Josephine Baker in so many interesting ways.