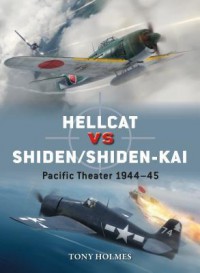 "Hellcat vs Shiden/Shiden-Kai: Pacific Theater 1944–45" provides the reader with a comprehensive analysis of the relative merits (and histories) of both fighters.

From October 1944 --- when the U.S. Navy's F6F Hellcat first sparred with the Imperial Japanese Naval Air Force's sturdy and rugged Shiden fighter in the skies over Formosa --- to July 1945, when both fighters last fought each other in the Battle of Bungo Strait, both planes represented the zenith of American and Japanese fighter design in the Pacific War. But for the Shiden and Shiden-Kai fighter, it was a matter of too little, too late because both types had been plagued with initial design and performance flaws which delayed the aircraft's production. Consequently, the Shiden/Shiden-Kai was placed in significant numbers with a fighter unit in Japan (in early 1945) made up of some of Japan's veteran fighter pilots, who showed what a formidable fighter it could be when skillfully flown. Boasting of four 20mm cannons (2 in each wing), a powerful engine, and excellent maneuverability, this was a fighter capable of taking on the Hellcat on more or less equal terms. Alas, for Japan, the Shiden/Shiden-Kai represented a last gasp and could not stave off defeat