A FRIEND'S PERSPECTIVE ON THE LITERARY GREAT WHO WAS GORE VIDAL 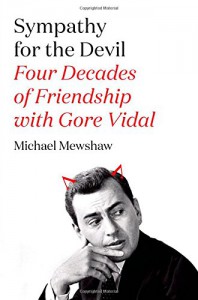 "Sympathy for the Devil: Four Decades of Friendship with Gore Vidal " is a book that takes the reader through the various stages of the relationship Michael Mewshaw had with the great writer, essayist, gadfly/wit, intellectual, and political polemicist who was Gore Vidal.

For me, as someone who once met Gore Vidal (albeit briefly) at a public event in which he was interviewed about his life and career and later signed copies of what proved to be his final novel, "THE GOLDEN AGE", I learned more about Gore Vidal on a personal level from reading "Sympathy for the Devil" than I had ever given thought to. Vidal had been my favorite living writer for close to 20 years, and in all that time, I gave little thought to his personal life. From reading his novel and hearing him expound on various themes on TV and radio, I became caught up in his persona. He was a very fascinating person. And though I never agreed with him on every matter he spoke about, Gore Vidal was never dull.

The following observation Mewshaw made about Vidal, made me sad, because it summed up the beginning of a slow and steady decline of a singularly unique figure on the literary and world stage: “In the space of time I had known him, Gore had become the kind of novelist he used to blister with disdain. Having mocked Faulkner, Hemingway, and Fitzgerald as rummies and lampooned his contemporaries – Mailer, [Tennessee] Williams, and Capote – as lushes who squandered their talent, having described Irwin Shaw and James Jones in their last years on Long Island as looking like ‘a couple of mangy old lions’, he was now as bad as any of them, and nobody except Howard [Auster, who was Vidal’s longtime companion and protector] dared tell him to take a look in the mirror.”

For anyone who is either a Gore Vidal fan or simply curious about who he was, this is the book for you. I highly recommend it.