PENNY MARSHALL: "My Mother Was Nuts" 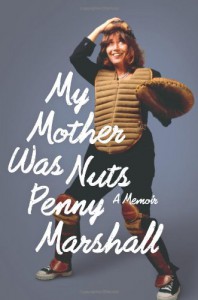 Today, I finished reading this memoir exactly at the point I arrived at my stop on the subway near where I work.  What timing, eh?

On the whole, "My Mother Was Nuts" was a very informative, funny, and engaging memoir.   I learned so much about Penny Marshall that I simply had no idea about.   I first became aware of her during the early 1970s because of the role she had in the TV sit-com "The Odd Couple" as Oscar Madison's secretary.    I thought she was funny and cute.    Then, I followed her at a distance when she was on "Laverne and Shirley."   By then, it was the mid-1970s, I was a preteen/early teen, and as "Laverne and Shirley" came on Tuesdays at 8 PM, opposite my favorite TV show on NBC at the time (which was "Baa Baa Black Sheep"), I didn't watch much of the goings on with Laverne DeFazio and Shirley Feeney in Milwaukee during the late 1950s.

Penny Marshall was one of those celebrities I grew up with but didn't follow her career closely.   I came to know her as an actress, film maker, and director.    So, reading her memoir was a very enjoyable and illuminating experience for me.    She was gutsy, a rabid sports fan, a big hearted person, and a hard-working pro who valued her family and friendships.

I like to sum up this review by citing a quote from Penny Marshall about a meeting she had with Princess Grace of Monaco in the 1970s.  "... I chatted with the Princess, who was as gorgeous as I remembered her in movies when she was Grace Kelly, the star from Philadelphia. When I asked if she missed acting, she smiled and said, 'What do you think I’m doing now?' ”