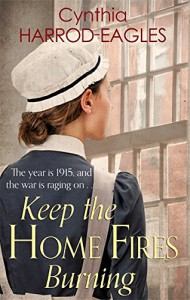 "KEEP THE HOME FIRES BURNING" takes up where "GOODBYE PICCADILLY" left off. It is now 1915. For both the Wroughton and Hunter families in Northcote, the war is beginning to take on a grimness that is beginning to make itself felt throughout Britain. Charles Wroughton, the eldest son and inheritor of the family estate, has been an officer in the Territorials, training his men for the time when they will be sent to France to assume their place at the Front. He and his fiancée, Diana Hunter, have grown more in love and plans are made for a spring wedding. The Hunter family is going through wrenching changes of its own with 2 of the older sons joining the military. Diana's younger sister, Sadie, now approaching 17, is very much a tomboy with a deep love for horses and the countryside. Before the year is out, she would have a job helping to train horses for service with the army in France and become more wiser in the ways of life through charitable war work in the community.

At the same time, the lives of the servants in the Hunter's employ are also undergoing changes paralleling what is reflected in the rest of the nation. Nowhere is this more evident than in the observations made by the Hunter's chef, a proud lady known as 'Cook' by the family. At Christmas, Cook muses to herself that "[e]verything was changing, and she didn't like it. She and Ada [the chief parlour maid] had been together for over twenty years, and their lives had not been altered in that time, bar the move from London to Northcote. Life was like that, before the war. Nothing ever happened, nothing ever changed, you knew where you were, and you knew where you would be next year.

"And your life would have been instantly recognisable to your mother, your grandmother, your great-grandmother. There was a magnificent solidness to the world - by which she meant England; a dignity, a worth. If a thing was right, it was right - why would you ever change it?

"But now, just in one year, everything was as different as could be. Young men went off to war and got killed. People got blown up in their own streets, in their own beds [thanks to the Zeppelins] ... Routines couldn't be relied on. There were strangers everywhere you looked. And women in particular were doing things you could never have imagined. ... Everything was upside down, everyone was out of their place, nothing could be depended on.

"And now Ada - Ada of all people! - wanting to walk out with a man [a soldier] she hardly knew. She and Ada had been like two halves of a walnut. What would happen to her, Cook, if Ada changed? What if she went away? Why can't things be the way they were? She threw the impassioned plea to Heaven. I hate change. I hate it!"

I loved this novel, being able to experience, in ways big and small, the changes all the characters went through in the course of one full year of war. One of the things I love about reading a Cynthia Harrod-Eagles book is how she can bring vividly to life any character that graces the pages of her novel. I developed strong feelings - pro and con - about these characters. I became intensely curious to see how they would fare, which was enough to make me stay with "KEEP THE HOME FIRES BURNING" to the final page. Now I'll catch my breath before going on to read the third novel in the series.