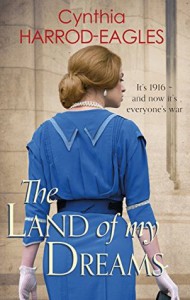 One of the hallmarks from reading a Cynthia Harrod-Eagles novel is that you will never be indifferent to the lives of the characters therein. And so it is with "THE LAND OF MY DREAMS", the third novel in the 'War at Home' Series.

It is now 1916. The First World War for civilians and combatants alike in Britain has taken on the attributes of an irresistible tide, altering everything in its path. In the Hunter family, 2 sons are now on active service. David, the eldest and his mother's favorite, is an infantry officer who has already received his baptism of fire in the failed Battle of Loos of the previous year. Bobby, who had followed his brother into the Army, developed a love for aviation and was able to wrangle a transfer to the Royal Flying Corps (RFC) whilst still in Britain. Bobby takes to the rigors of ground school and the rather haphazard flight training scheme then in effect in the RFC with nary a misstep. With the advent of spring, he earns his wings and is assigned to a frontline unit in France where he becomes a skilled scout pilot, flying the nimble Airco DH.2 single-seat biplane 'pusher' aircraft on various offensive patrols and escort missions over the lines. By mid-year, the Battle of the Somme would commence, a cataclysmic struggle that would sorely test the resolve of both the British forces at the Front and their families at home.

In the meantime, the rest of the Hunter family is caught up in the pressures and changes the war has already wrought on the world around them. Beattie, the matriarch of the Hunter family, while busily engaged in an expanding number of charitable activities related to the war, has a chance encounter with someone from her past which could have consequences on her marital relationship. Diana (the eldest daughter) unexpectedly finds 'love' - if one can truly it that - from an unexpected corner. I won't say more on that score. For the reader of this review whose curiosity about this novel has been whetted, I will leave it to him or her to take up "THE LAND OF MY DREAMS" and discover how the third year of war impacts on the Hunters, some relatives thereof, and some of the servants in the Hunter household