THE FORTUNES & SORROWS OF WAR 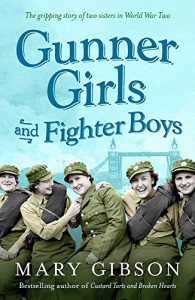 "GUNNER GIRLS AND FIGHTER BOYS" brings home to the reader the impact of the Second World War on the British people, combatants and civilians alike. The novel is mainly centered around a family (i.e. the Lloyds) in a neighborhood in London known as Bermondsey. Indeed, we first meet the Lloyds (Mum and Dad; their eldest daughter Peggy - and her husband George, an asthmatic who's a few years older than his wife and lives principally as a grafter, evading the law by hook and by crook through various black market activities; Jack, the Lloyds' only son who sometimes does a few jobs for George; and youngest daughter May, a bookworm and homebody) on Sunday, September 3, 1939 - the first day of war. An air raid alarm is sounded and while most of the Lloyds seek security in a community shelter, May is intent on ensuring that the Sunday dinner is not ruined. The full reality of Britain being at war with Germany still had a certain unreality to it.

In the years to come, the war would exact a heavy toll on the Lloyds and Bermondsey itself. Lives would be radically changed, rudely upset, lost. And May through her service in the Auxiliary Territorial Service (ATS) - the women's branch of the British Army - would find her life profoundly altered. For anyone who wishes to understand in some way how the Second World War impacted upon those who experienced it, For that reason, I highly recommend reading "GUNNER GIRLS AND FIGHTER BOYS." It'll put you on an emotional roller coaster you won't soon forget.