THE CURSE OF THE SATAPUR MOONSTONE 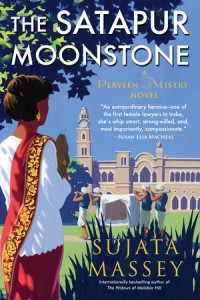 In the mystery of "THE SATAPUR MOONSTONE", Perveen Mistry, one of India's first women lawyers, is employed by the Kolhapur Agency on a short-term basis to adjudicate and devise an agreement which would ensure the best education for 10 year old Maharaja Jiva Rao of the Kingdom of Satapur (one of India's princely states, which under the aegis of the British Raj, enjoyed local autonomy). The reason for Perveen being given this delicate assignment was a bitter dispute between the kingdom's 2 maharanis (Jiva Rao's mother and his grandmother, the dowager queen) as to the type of education each desired for the maharaja, who had recently lost both his father and older brother (in the latter case, a tragic hunting accident was the likely cause of death). And as both maharanis were in purdah, no man was permitted to see and/or have any direct dealings with either of them. Here is where Perveen's services as a lawyer were needed and required.

What follows as the story progresses once Perveen makes the journey from Bombay to the isolated Kingdom of Satapur (via the Circuit House situated at some distance from the Kingdom, where the British political agent responsible for overseeing matters pertaining to Satapur and the surrounding area resides) are various palace intrigues and unforeseen hazards that may imperil the maharaja and Perveen herself.

Sujata Massey has again crafted a compelling and thrilling novel with fully realized characters no reader can be indifferent to. In addition to a map of the Kingdom of Satapur, there is also a glossary that identifies many of the terms used in the novel that are uniquely associated with the India of that era (i.e., the early 1920s and earlier).

Simply put, "THE SATAPUR MOONSTONE" is a winner! I can't wait to read the next novel in the series