A LIFE SPENT IN SEARCH OF TRUTH & ENLIGHTENMENT 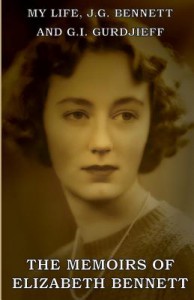 "My Life: J.G. Bennett and G.I. Gurdjieff: The Memoirs of Elizabeth Bennett" is an incomplete memoir by the author. It spans from her formative years as the daughter of a house master at Eton College, the health challenges she faced as a little girl and adolescent, the 5 years she spent in service with the Women's Auxiliary Air Force (WAAF) during the Second World War, to her meeting with J.G. Bennett near the end of the war --- a man 20 years her senior best described as far-seeing in thought, attitude, and action, with whom she would later share her life and bear him 4 children -- and the charismatic mystic and teacher G.I. Gurdjieff.

The memoir is focused more on relating the experiences Elizabeth Bennett had with Gurdjieff in France in the late 1940s (til his death in 1949), as well as with Bennett (whom she referred to as 'Mr. B') through the mid-1950s. There are also numerous color drawings made by Elizabeth Bennett herself during various phases of her life (she passed away in August 1991 from cancer; she was 72) and what loose ends there are in the memoir are filled in by her 2 sons. On the whole, this is a very readable book, written in a very honest, straightforward manner.