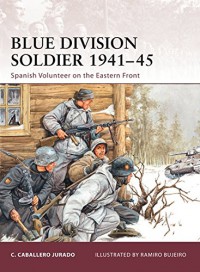 For anyone wishing to gain a concise and comprehensive understanding of the history of Spain's Blue Division -- made up of volunteer recruits and soldiers from the Spanish Army, some of whom were veterans of the Spanish Civil War -- its record as a combat unit in the Wehrmacht in the northern sector of the Eastern Front between August 1941 and the end of 1943 when it was disbanded and returned to Spain --- THIS IS THE IDEAL BOOK.

"Blue Division Soldier 1941-45: Spanish Volunteer on the Eastern Front" is also rich with photos and illustrations of unit insignias, medals, and decorations that were earned by the Blue Division, which continues to have a certain mystique in Spain - as well as generating interest among the Spanish people.