GROWING UP - A Wonderful & Poignant Memoir Everyone Should Read 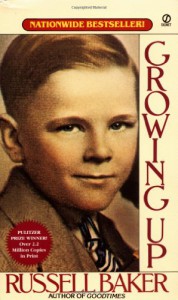 Russell Baker had a well-deserved reputation as a journalist, and this memoir reflects that. It reads as a vital, engaging, at turns funny and poignant story of Baker's life from his earliest years spent with his paternal grandmother and relations in a backwoods Virginia community in the late 1920s that remained rooted in the 19th century, to New Jersey, Baltimore (where Baker graduated from high school at 17), his naval service in World War II as an aviation cadet and pilot, his student life at Johns Hopkins University postwar, his subsequent career as a journalist, and marriage.

I soo loved reading this memoir with its rich, varied cast of characters from Baker's family, friends, and relatives. It was so good that I felt like I was a guest at Russell Baker's table as he regaled me with the story of his life. This is a memoir that should serve as a template for anyone interested in telling his/her life story.