LET'S GO OUT TO THE BALL GAME 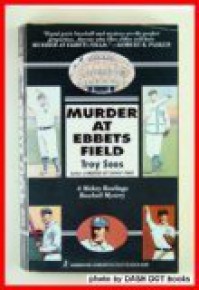 "MURDER AT EBBETS FIELD" is the third novel in the Mickey Rawlings series of mystery novels I've read in which Major League Baseball looms large. This time, the reader is transported to Ebbets Field in Brooklyn in the first week of August 1914, where the Brooklyn Dodgers is playing against their crosstown rival, the New York Giants. Rawlings is now a utility ball player with the Giants, which are led by the irascible, hard-driving, profane and legendary manager John McGraw. The Giants are in the midst of a pennant race, leading the league. Should the Giants manage to maintain their lead through the next couple of months of the season, they would be going to the World Series, which is Rawlings' greatest ambition. That and maintaining a .250 batting average.

Little did he know that his life was about to change. A movie director from the Vitagraph Motion Picture Company (Elmer Garvin) is chatting with McGraw, who is none too pleased to be pestered by Mr. Garvin. Garvin explains that he's at the game to make a baseball movie and would like to have one of McGraw's players appear in it, saying to McGraw that "We'd like to use one of your players for a few shots --- give the picture some realism, you see ---". Rawlings, who is also an avid movie fan, is watching the film crew set up their equipment and also looking on at the exchange between McGraw and Garvin. McGraw makes it clear that he has no interest in what Garvin wants to do. So, Garvin gives way to a tall, elderly gentleman with a posh manner who goes over to McGraw, introducing himself. It turns out that McGraw and the gentleman (Arthur V. Carlisle) have had a previous acquaintance through a social club, the Lambs, to which they both belong. Carlisle is able to cajole McGraw to allow one of his players to appear in Garvin's movie.

So it is that Rawlings is used for a few shots, both at Ebbets Field and later in the movie studio in Brooklyn, where he makes the acquaintance of a number of people --- including Casey Stengel, a rival player with the Dodgers who would later achieve fame as one of the greatest baseball managers in history; Margie Turner a young actress with whom Rawlings establishes a growing rapport; and a beautiful film star Florence Hampton, who owned a share of the Dodgers and is later found dead under mysterious circumstances. Indeed, it is Hampton's death which serves as the touch off point for Rawlings as he becomes involved in trying to solve a series of murders while trying to safeguard his own life, which ends up being caught in the cross hairs of Fate.

"MURDER AT EBBETS FIELD" is a delightful mystery novel that'll keep the reader guessing as to who did what and why.