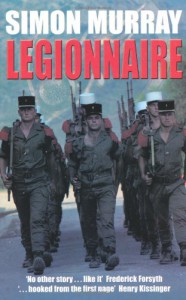 I first became aware of Simon Murray when I watched on TV one night a special program about the French Foreign Legion in which he acted as the narrator. I was rather impressed with him, so when I came across this book (after having read the Douglas Porch history of the Legion in the early 1990s), I was eager to read it.

From the moment Murray enlists in February 1960, he is put through the rigors of training, which at times was quasi-sadistic, for the NCOs exercised considerable control over their charges (delighting in giving them grief for the slightest infractions), both in France and in Algeria. Murray saw a fair amount of combat in the Algerian War, mainly in the mountains. He writes honestly of his experiences, sparing no punches, as the following will attest:

"DeGaulle has been in Algeria recently and he has been broadcasting speeches which many here regard as treasonous as he outlines his reasons why the Muslims of Algeria should be given the opportunity of deciding their own future. He is desperately seeking a solution to this war, not for the sake of peace itself but because this endless fight is draining French coffers and, unless the outflow is stemmed, France will soon become an economic wreck. In 1958 when he returned to power in France, deGaulle's words to the French colonials in Algeria were 'Je vous ai compris - Algerie francaise'. It now seems as though he his changing his tune and is looking for a different solution which will give the country independence and yet keep it tied to France.

"But the Arabs are set on total independence, and the French colons are equally determined to retain all that they have here. The colons are extremists in every sense of the word; they do not understand compromise and they will go to extremes to keep what they believe to be theirs by birthright.

"There have been riots during the last few days which have resulted in some two hundred people being killed. Because of this, we are not en alerte. At the beginning of January there is to be a referendum which will be held in France as well as Algeria. The referendum is understood to be deGaulle asking for a free hand to negotiate with the F.L.N. for the establishment of the Algeria of tomorrow, which will be the first real step to independence, but perhaps on his own terms."


Two years later, Algeria wins its independence. As part of the agreement with France, the French are allowed a limited tenure in some areas of the country (inclusive of the former naval base at Mers-el-Kebir) and oil rights in the Sahara for 5 years. The Legion has to abandon its traditional headquarters at Sidi-bel-Abbes and relocate much of its staff, equipment, and assets to the South of France. But Murray's unit and a few other units of the Legion are allowed to remain in Algeria on a temporary basis. France was then in flux, having barely survived an attempted coup d'etat. Consequently, given that the Legion no longer had any wars to fight on behalf of la patrie, there was some uncertainty as to whether it would be allowed to remain in existence. (Some Legion officers had sided with the coup leaders who came out of the French Army.) But thankfully the Legion had some farsighted officers in its ranks who helped to secure for it a new raison d'etre and favor with Paris through developing a variety of special skills and roles for itself.

Murray writes well and what struck me the most in reading this book was how a group of men from across the globe (who tended to stick together during basic training in rigid cliques defined by their respective nationalities) were able to be moulded into a cohesive whole, acquiring fluency in French and becoming wholly absorbed in the ethos and spirit of the Legion. Indeed, I would liken the French Foreign Legion of that time to the Jesuit Order as it was when Ignatius Loyola led it.

This is an incredibly intense and enthralling story that anyone with a thirst for adventure will love.