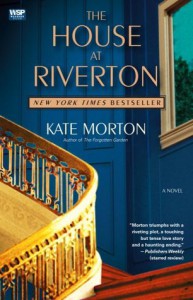 Here's a novel that serves as a bridge between present and past, revealing startling secrets, complicated and troubled lives among the privileged classes and those persons from the lower rungs of British society who spent their lives in service to them in their country estates or stately city homes in the early 20th century.

Grace Bradley, a woman in her late 90s, is the main narrator of the novel. Her account of her life in service as a maid at Riverton House begins in 1914, shortly before the outbreak of the First World War. She is then 14 and spends the next decade of her life in service to the Hartford family. The novel, as it unfolds, is a bit of a slow burner. But I hasten to add, not dull. It has all the flavor and suspense of 'Upstairs Downstairs' and 'Downton Abbey.' Read on and you'll find yourself transported back to a time in which a society caught between the dying echoes of the Victorian and Edwardian Ages, was harshly shaken to its core by a world war and then afterwards sought to rebalance itself in the Roaring '20s through resuming a normal and ordered existence, wild parties, and licentious living.
Tweet