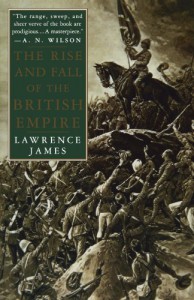 In writing this critique, I must advise any prospective reader to brace him/herself for a long stretch, for this is a weighty and comprehensive book about one of the most extraordinary empires that ever existed. In the case of the British Empire, it did not come into being as part of a deliberate plan from one nation to dominate a large corner of the globe. The Empire's origins are to be found in Elizabethan England, in which a poor nation barely recovered from a prolonged period of internal dissention and external threats from Imperial Spain, began to reach out to both the Americas and India to establish trade and markets. Eventually, over time, as England grew and prospered and gave rise to Great Britain, the trade concessions in India and the growth of its land holdings in the Americas and the West Indies in the 17th & 18th centuries would act as springboards (notwithstanding the occasional setbacks, such as the loss of the American colonies in 1783) to an extensive network of colonies and protectorates that straddled the globe by the 1930s. This book also provides revealing analyses as to why the Empire declined and fell as Britain herself (after 1945) could no longer afford to be a major player on the world stage.

This is a book only for the serious student of history. I highly recommend it.
Tweet