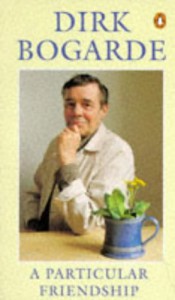 It's always a pleasant surprise to chance upon a book that touches the depths of one's soul, brings out a full-throated laugh or chuckle, and leaves you wanting MORE.

This is a compilation by the movie star Dirk Bogarde of a correspondence (via letter and postcards, which he affectionately dubbed "starlings") he maintained with an expatriate Englishwoman (making her home in the U.S.A.) between 1967 and 1972. The correspondence began by accident. The Englishwoman (known as Mrs. X), while getting her hair "coiffed" in a beauty salon one day, came across a magazine containing an interview Bogarde gave to a journalist in which he touched upon a house he had recently acquired in the English countryside. It so happened to be the very house Mrs. X had lived in during the Thirties before leaving for America in 1939. She wrote Bogarde a short letter informing him of this fact. Bogarde was so intrigued by her letter that he wrote her back. In response, Mrs. X sent him photos of the house as it looked during her time there, which greatly impressed him. Thus began their correspondence, in which a few ground rules were set: both would communicate with each other solely by mail (and never try to communicate by phone), neither of them would request a photo of the other (thus reserving a special kind of anonymity between them - though, later, Mrs. X did by happenstance glimpse Bogarde in a couple of TV interviews), and both would be very discreet about their correspondence.

What quickly becomes evident is how much of a witty, engaging writer Bogarde was. I admit to having been intrigued about Bogarde for years, though I've only seen a portion of one of his movies, and have read in magazines scattered interviews he had given. Now, having read this wonderful and endearing book, it makes me wish I could have met him at one of the weekend dinners he'd have at his English home for his friends (many of them in the movie, political, and literary worlds), and absorb all the bubbly conversations.

I'd like to cite the following except from a letter Bogarde wrote to Mrs. X from the Hotel Bristol in Vienna (October 27th, 1967). He was in the process of making a film in nearby Budapest, which struck him as a rather depressing place:

"Budapest very sad. Scarred by the war and the revolution of '56 ... almost no trees in the streets, many cut down for barricades or firewood. Buildings shabby, shell-pocked, some gutted still. People, particularly the women, quite smart ... even though the fabric is what we called in the war 'utility'. Very little choice, but they have a great Chic, and make do wonderfully. Goods in the shops in short supply, except in the Tourist Shop in which you can only spend in dollars. Great many Russian uniforms in evidence, not in the City so much as just outside. ... There is a drabness and resignation everywhere. The failure in '56 has corroded deeply. ... The old Ritz a grey office block now, heavily guarded by booted and armed gentlemen who waved us away furiously. Food dull, meat twice a week ... except in the Tourists' Restaurants which are attractive but hideous with Gypsy Music and violins at every table. Which I simply detest! And the food is always served cold on cold plates. Wine OK. If you don't get bored stiff with Bulls Blood and Tokai ... However, the people are charming and warm, and the Hungarian crew at the studio are excellent, and pathetically excited that this film is the very first Hollywood-Hungarian Production. I hope they don't get cheated. ... Met a very pleasant man who was a Count before the war, now a janitor in a block of flats which entitles him to a room. He was very civilized, amusing, and courageous. 'I am the perfect example', he said, 'of the new slogan of which we are all so proud. {We have put the Bottom at the Top, and the Top at the Bottom.}' They have too; and it is almost always disaster. You can't turn a boiler maker into a concierge overnight. But they sure as hell have tried. The top Party members, who dine constantly in the Hotel dining room, with their ample wives stuffed into satin and fur and all a-glitter with jewels, look exactly like Nixon. Doubtless with the same ambitions. ... Why Communism has to be so utterly joyless I cannot imagine. Why so grey? Why so vindictive? Why so terrifyingly humourless? Have you ever known an amusing Communist, or a witty one? Or, at least of all ever, a funny one?'

This book has whetted my appetite to read more Bogarde.
Tweet