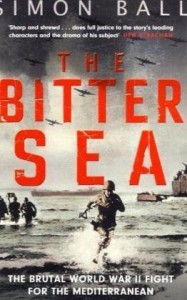 Prior to reading this book, I had regarded the value of the Mediterranean Sea in the early decades of the 20th century as mainly economic, but taking on a vital strategic importance between 1940 and 1943. During those critical years of the Second World War, the Mediterranean and the lands surrounding it constituted the one area (aside from the air war over German-occupied Europe) where the British (and after November 8, 1942, the Americans) could contest the supremacy of the Axis Powers. That was the range of my understanding and interest in the 20th century Mediterranean.

This book revealed to me a dramatic evolution that took place between 1935 (the year Italy invaded and subsequently conquered Ethiopia, thus beginning its quest to establish its own sphere of influence in the Mediterranean and North and East Africa) and the early 1950s in the way the Mediterranean figured in both regional and international geopolitics. Britain in the 1930s was still the dominant power in the Mediterranean. Italy, as mentioned earlier, wanted to carve out its share of power and influence (and become a counterweight to Britain). And the French simply wanted to maintain its control of Algeria, Morocco and Tunisia. Taken together, those 3 colonies, along with French Equatorial Africa and French West Africa, served France’s broader strategic and economic interests. For in the advent of another World War, these lands would again provide the soldiers and raw materials needed to defend France itself.

Well, with the fall of France in June 1940 and Italy’s entry that same month into the war in league with Germany, the Mediterranean became a primary war zone. Were it to be made into an “Axis lake” as seemed very probable, Britain might lose the war. "THE BITTER SEA" relates a lot of, not only the military actions, but also the use of propaganda, espionage, and political subterfuge by both sides to win over the hearts and minds of the people in the region impacted by the war. And then, after 1945 with the emergence of the U.S. and Soviet Union as the 2 major contending powers on the world stage, “[t]he unity of the Mediterranean … no longer [had] anything to do with the old west-east route [once key to British economic and naval interests]. The Suez Canal was of little importance. Rather the Mediterranean … [became] the means by which a global war against the Soviet Union could be prosecuted.”

“In brief, the story of the Mediterranean in the mid-twentieth century had been that the Italian Empire challenged the British Empire for hegemony, to the ultimate benefit of the American Empire.” For anyone with a keen interest in history and politics, this book is a veritable treasure trove.