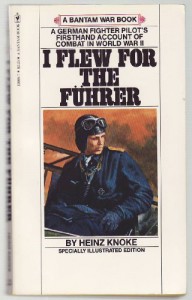 This Bantam edition of Knoke's military memoirs I read when I was in high school.

The reader immediately feels a part of Knoke’s life in the air. One of the most searing episodes in the book was when Knoke, in advanced flight training, was awaiting his turn, along with his fellow fledglings, to fly for the first time the Messerschmitt 109 (ME-109), then one of the most sophisticated fighter planes in the world. While a very nimble and durable fighter, the ME-109 was very tricky to handle at both take-offs and landings. It had a reputation for being unforgiveable to pilots who failed to handle it with care. In this case, as Knoke watched from the ground, the pilot tried to land the ME-109 once and failed, because of excessive speed. So the trainee pilot made another circuit of the field, cutting his speed, preparatory to trying another landing. This time, the aircraft came in unsteadily, cartwheeled and exploded. The pilot was thrown from the cockpit, minus his legs, howling in agony. He died shortly afterward. Knoke was shaking in his boots. Now it was his turn to fly. Another ME-109 was brought out on the airfield. "If you expect to fly on operations, take her up now. Otherwise, you’ll never be a fighter pilot,” Knoke’s instructor sternly advised. He took the fighter up and put it through its paces. He landed it without mishap, feeling sick.

Eventually, Knoke completes his training and serves first with the 52nd Fighter Wing (JG-52) on the Channel Front in the spring of 1941. There he sees some action over Britain and the Channel before his unit is transferred East, to take part in Operation Barbarossa, the invasion of the Soviet Union. Less than 3 months later, Knoke is returned to the West, this time to serve with another fighter group, flying operations over the North Sea and Northern Germany. The following spring, Knoke is sent to Norway, where he shoots down his first enemy plane, a British Bristol Blenheim twin-engined bomber. Knoke grows in experience and is transferred back to Germany, where he spends the next couple of years mainly taking on the U.S. Eighth Air Force heavy bombers over the Reich. His war is a long one and the reader will feel in every page, the intensity of it.