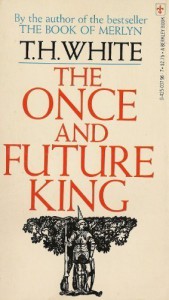 When I read this book in my mid-teens, I absolutely LOVED it, because it nurtured and excited my imagination.

"THE ONCE AND FUTURE KING" combines all the elements of Arthurian legend, adventure, and history in describing the lives of Arthur, Guinevere, Lancelot, and some of the other notables of Camelot. (This is the novel, some of whose elements were later adapted to the screen as the Disney movie "The Sword in the Stone".)

White has written a delightful, entertaining story not without its harrowing moments. We first see Arthur as a boy ("The Wart") living with his adoptive family and serving as a page to his older brother. Merlin's role at the beginning of the novel is as a teacher for Arthur. (Note. Merlin had been entrusted by Arthur's real father with protecting his son.) He leads Arthur on a variety of adventures, which I won't go into here, except to say that the reader will be amazed with the rich imagery White creates.

The novel progresses through Arthur's life, his reign, his sorrows and joys, and the perils and highpoints of life in an England mired in upheaval and turmoil. White shows the reader how the forces of light and darkness interplay in the shaping of a society where magic can be a real factor in everyday life. It's a long novel, so brace yourself for a healthy sprint.