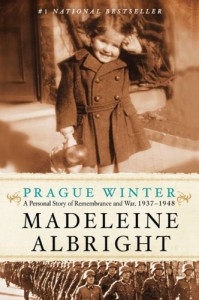 Madeleine Albright has written a very fascinating and compelling book, shedding light on her native Czechoslovakia and its history, her parents and the challenges faced by their generation, her extended family, and her formative years (up to age 10).

Prior to 1918, Czechoslovakia existed only as a dream in the minds of a number of dedicated, hard-working, intelligent and astute Czechs and Slovaks. Of their number, there was one man who stood out head and shoulders above the rest: Tomas Masaryk (1850-1937). According to Albright, "Masaryk saw a world in which the settled verities of religious conviction, political order, and economic status were under attack. Moderization was essential but also dangerous because it could leave people without a way to anchor themselves either intellectually or emotionally. The solution, in his eyes, was to embrace religion without the straitjacket of the Church, social revolution without the excesses of Bolshevism, and national pride without bigotry. He believed in democracy and the capacity of people to learn and to grow. His dream was to build a Czech society that could take its place alongside the Western countries he admired."

With the collapse of the Austro-Hungarian Empire and through the efforts of Masaryk to interest the West during WWI in his cause for an independent Czech nation, Czechoslovakia came into being before the end of 1918. (Subsequently, the nation's borders were firmly defined at the Paris Peace Conference the following year.)

Albright shows how well, considering its growing pains and challenges, Czechoslovakia developed and prospered under Masaryk's beknighted leadership. He was one of those rare political leaders of great will, charisma, and intellect who truly lived up to the democratic ideals he espoused.

Upon Masaryk's death in 1937 (the year Albright was born), leadership of the country passed to his close associate Edvard Benes. Benes, while not of the stature of Tomas Masayrk, was a principled man with some measure of political acumen. He led his nation through the Munich Crisis of 1938 (which resulted in the West's abandonment of Czechoslovakia following the ceding of the Sudetenland region to Hitler's Germany), the dissolution of the rest of the Czech nation when Hitler marched his forces into Prague in March 1939, and Benes' own subsequent departure to Britain, where he led a Czechoslovak government-in-exile through the Second World War. At the same time these momentous events were played out on the European stage, Albright's family (her father was a diplomat in the Czech Foreign Ministry) was forced to flee to Britain, too.

In reading this book, I learned a lot about Czechoslovakia, which filled me with admiration for Tomas G. Masaryk, his son Jan (a truly remarkable and humane man), and Albright's parents (Josef and Marie Korbel). What made for sad, sobering reading was learning that most of Albright's remaining family and relatives in Czechoslovakia were killed in the Holocaust. (Albright, who was baptized Catholic as a very young child in Britain, had no idea of her Jewish heritage til decades later, through a Washington Post news story during her tenure as Secretary of State in the Clinton Administration.)

Anyone who enjoys history in the form of a good, compelling story should read this book. You'll be glad you did.
Tweet