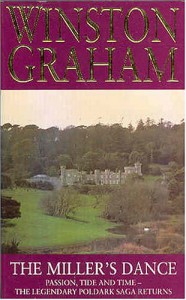 The story begins along a Cornish beach in February 1812. Ross Poldark and his family, along with some close friends and several members of his mining company (all hard-working men) await the arrival by sea of a steam engine to be used in mining operations. Britain is in a somewhat precarious state, what with social unrest in the north caused by the displacement of workers by the growth of industry and the uncertainty of the long, protracted war with Napoleon who bestrides Europe like a Colossus. Only in the Iberian Peninsula, where British forces under Arthur Wellesley, assisted by an assortment of Spanish and Portuguese units, are contesting French control is there a sliver of hope of frustrating and driving Napoleon back into France.

Here the Poldark children --- namely Jeremy and Clowance --- take center stage in this novel. Jeremy, who has become highly knowledgeable about the design, manufacture, and use of steam engines, has lost his heart to Cuby Trevanion, who hails from an old, distinguished family in Cornwall that has fallen on hard times. Cuby's guardian, her older brother Major Trevanion, whose penchant for drink and gambling has heavily indebted the family, took an instant dislike to Jeremy. (Besides, the Poldarks, though from a longstanding name and highly esteemed in the community --- and Ross, also a Member of Parliament ---- for the Major could not offer enough money to bring the Trevanions safely out of debt.) Nevertheless, Jeremy tries, when occasion allows in the shape of an opera or social outing where he knew Cuby would be present, to find whatever time he could for a tete-a-tete with her. Cuby rebuffs his subtle advances, though the reader is given reason to suspect that she may have feelings for Jeremy. But, appreciating her family's indebtedness and having a deep, filial loyalty and love for her oldest brother the Major, she made clear to Jeremy that she would be willing to accede to any future plans the Major may have for marrying her to a comfortably wealthy man, whose fortune would ensure lasting financial security for the Trevanion family.

So long as it was unclear whom would be Cuby's prospective husband, Jeremy maintained a thin thread of optimism that perhaps, with some time, patience, and an improvement in his own fortunes through work at the mine and the fruition of his plans for developing steel engines for use in overland transport --- he would sway Cuby to his side. But towards the end of the year, Jeremy is in for a rude awakening.


Clowance is dating Stephen Carrington, a devil-may-care, fun-loving, hard working sort of man. (Steven's natural element is the sea, where he served on a privateer. But finding himself in somewhat straitened circumstances upon arriving in Cornwall, he, with Ross's help, gets a job working on the land, as well as for the Poldark mining company. All the while, Steven is biding his time til he can get back to sea, this time with his own ship.) He exudes an animal magnetism that she finds hard to resist, for Stephen is quite unlike any other man she has met. Both become set on marriage. But theirs is not an easy relationship for a host of reasons. Both Clowance and Steven would face a number of challenges that will leave their relationship considerably strained by the New Year.

In the meantime, the Poldarks weather some changes of their own, Ross ponders whether or not to remain in Parliament, and Napoleon's status as the Colossus of Europe is seriously challenged both in the Iberian Peninsula and Eastern Europe. So the novel ends on a somewhat hopeful note in January 1813 with the Poldarks enjoying a break in the wintry weather with a stroll on the beach, savoring the balmy breezes and lightly clouded sky above the sea.
Tweet