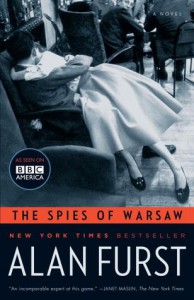 The story begins in Poland in late 1937. A man who looks to be a modest businessman arrives in Warsaw, briefcase in hand. He books a room at the Hotel Europejski for an assignation with his mistress, a Polish countess. All is not as it seems. The businessman is Edvard Uhl, an engineer and specialist in tank design, who lives just across the border in Breslau. There is more to Herr Uhl than meets the eye. For some time, he had had some "dealings" with the French military attache. Both men had worked well together for some time. But now the attache has been recalled. His replacement is Colonel Jean-Francois Mercier, born of the lesser nobility in the heart of the French countryside, a graduate of Saint Cyr (the French equivalent of West Point), where one of his classmates was a fellow officer by the name of Charles de Gaulle. Mercier is a veteran of the First World War and of the Russo-Polish War of 1920-21 (where he again renewed his acquaintance with de Gaulle).

Being an attache begins as a bit of a bewildering experience for Mercier le veuf. Besides making the acquaintance of his Polish counterparts, and ingratiating himself with the diplomatic community in Warsaw through endless rounds of parties graced with scintillating conversations, bubbly champagne, and fine food, Mercier has to learn --- quickly --- the skills deemed essential for being a successful spy. In the process, he embarks upon a journey with many twists and turns. A journey in which one step too far could be his last. The stakes are high. The margins --- infinite, given the increasingly fractious relations among Poland, Germany, and France.

Furst shows in this book why he is generally acknowledged as the master of the historical espionage novel. Espionage brings out both the best and most base aspects of people. In reading "[b: The Spies of Warsaw|2294328|The Spies of Warsaw (Night Soldiers, #10)|Alan Furst|http://d.gr-assets.com/books/1320510011s/2294328.jpg|2300636]", brace yourself for a thrilling and bumpy ride.
Tweet