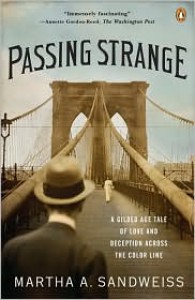 Clarence King (1842-1901) is a man known to few Americans today. Yet when he lived, he had enjoyed a high regard and reputation as a geologist, explorer, first director of the United States Geological Survey (USGS), and writer of "Mountaineering in the Sierra Nevada." King also had friends in high places (such as Henry Adams and John Hay, who, in his early 20s, had served as a social secretary to President Lincoln and later served as Secretary of State under President McKinley) and was much loved for his bomhomie, wit, and kindness towards all people he met on his various travels and in his everyday life.

What was not known, however, was that, from the late 1880s until his death, King had lived a double life. He had assumed the identity of a fair-skinned black man ("Negro") and married a black woman with whom he had 5 children. This book gives the reader entree into, not only King's life, but also the life of his wife, and the subtle and virulent racism common in late 19th and early 20th century America.

In reading this book, there was one paragraph that resonated deeply with me. It is, as follows:

"King had been as well equipped as any man to seize the opportunities afforded by American expansion into the West in the decade after the Civil War. He helped engineer that expansion, harnessing federal resources to map the region's contours, catalog its natural wealth, and imagine how it could fuel the growth of American enterprise. But with the West mapped, its vast stretches of sparse settlement crisscrossed by railroads, its natural resources increasingly in the hands of large corporations, imagination and bravery were no longer enough. Nor was intellect. Scientific knowledge and personal bravado now mattered less than capital and corporate know-how."

All in all, this is a VERY EYE-OPENING book which helps to shed light on why a white man who enjoyed high privilege and status in 19th century America would choose to pass (in secret) as a Black man in a society that openly mocked, derided, and despised Black people.
Tweet