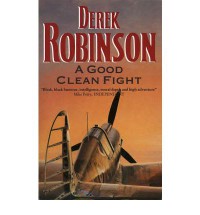 Hornet Squadron, who figured prominently in Robinson's previous novel, "A Piece of Cake", is now stationed in North Africa, where they are tasked with fighting both Rommel's Afrika Korps and the Luftwaffe. There is also a SAS unit (SAS = Secret Air Service, an elite unit in the British Army which carried out long-distance missions against German military installations and air bases well behind enemy lines in the desert) led by a rather eccentric commander (Captain Lampard) determined to make his mark against the Germans and Italians.

This novel is peopled with a wide array of characters --- from both sides of the war --- who bring out both the life and death intensity of combat, as well as the absurdist nature of war itself.

"A Good Clean Fight" is entertaining to read, too, for the author excels in fleshing out characters no reader can long remain indifferent to. Reader, prepare yourself for an enjoyable experience.
Tweet