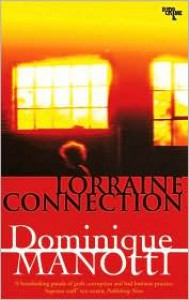 To date, I've read 3 novels by Dominique Manotti. Each of them were taut, detective thrillers that attested to the Machiavellian side of people wielding power on both the political and judicial levels. This particular novel was somewhat of a departure from the previous 3. The initial focus of this novel was on a Korean-owned factory in Lorraine (an economically depressed area of Eastern France) producing cathode-ray tubes that were marketed in Eastern Europe in television sets by the parent company. Far from being a profitable factory, its long-suffering employees daren't protest against the numerous safety hazards around them. That is, until a pregnant colleague faints in response to the explosion of a cathode-ray tube on the production line. This particular incident serves as the catalyst for several workers to stage a strike. In the process, a fire breaks out mysteriously, which shuts down the factory.

At this point, the reader is treated to both a micro and macro view of the strategic role the factory has as an entity occupying center stage in a battle played out in Brussels, Paris, and Asia for the takeover of one of France's ailing electronic giants. It's a cutthroat battle involving murder, blackmail, and dirty tricks. These are the elements that power the drama and narrative of the book. I reccmmend "Lorraine Connection" to any reader interested in thrillers in which economics and Realpolitik figure promimently.
Tweet