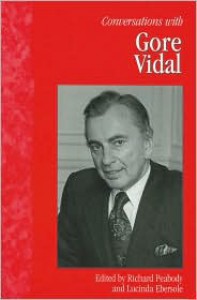 In reading this book --- made up largely of a series of interviews from 1960 to 2003 of the great writer, wit, playwright, scriptwriter, thinker, social critic and essayist, GORE VIDAL --- I was once again reminded of the value of such a prodigious and versatile talent whom his many critics and detractors strove mightily to, at first destroy --- and failing that, to marginalize. Whatever one might think of Vidal, he was NOT dull. He has left us a vast body of work, spanning from the publication of his first novel, "Williwaw", in 1946, to his 3 critical analyzes a decade ago of the state of our political system, the invention of our nation from the perspective of the Founding Fathers, and his "Imperial America: Reflections on the United States of Amnesia."

This was a book I thoroughly relished reading. It made me think, laugh, reflect, and re-examine much of what we understand of our ourselves as Americans and our relationship with the world, as well as prevailing perspectives on the arts, literature, history, politics, and religion.

GORE VIDAL was a courageous man. And for me, as one who was privileged to meet him in person at a public event in Washington in September 2000, he was the one writer who could always challenge, excite, and stir up my thinking. So, even if I was not always in agreement with some of Gore Vidal's views, I grew much in understanding of power and how it is (and has been, throughout history) exercised throughout the world --- as well as of people of power and influence --- because of his contributions. Vidal's passing is a loss for us all.