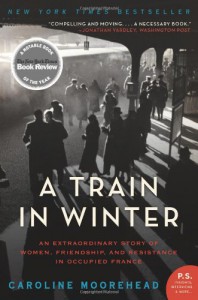 This book is true to its billing. Though I was born a couple of decades after the Second World War, the War itself for me is not an abstraction. My father and several relatives served in the military during the War, experienced the hazards of combat in Europe. Besides, my father also knew people who lived in France under the German occupation. Thus, reading this book was a reminder for me of how the Second World War impacted upon the heart and soul of a nation.

The focus of the book is on a group of French women --- all members of the Resistance --- who were betrayed to the Germans in 1942, tortured by collaborationists and the Gestapo, and shipped east to Auschwitz in January 1943. Out of 230 women who arrived in Auschwitz, only 49 returned alive to France after the War.

This book makes for very sobering reading. It is a testament to the strength and spirit of true, supportive comradeship among a group of women resolved to maintain their humanity amid the horrors of Nazi sadism and brutality. Anyone with a love for life and peace should read this book so that he/she can better appreciate the price that may have to be paid should another scourge like Nazism threaten the world.