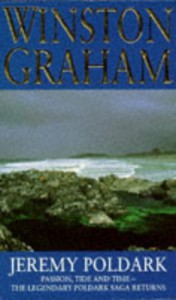 It has been a long while since I've read a novel which has both excited and dazzled me in the way that this one has. As a writer, Winston Graham paints pictures with prose the way Michelangelo did with his palette. Not a word is wasted, evoking images of the windswept landscape of Southwest England abutting the ocean sea that is Cornwall, dotted here and there with a smattering of landed estates, villages, inns, mines, coves, and houses of varying kinds.

It is August 1790 and Ross Poldark finds himself on trial at the Bodmin Assizes for his life, accused of formenting a riot and encouraging the theft of the King's properties from the wrecks of 2 ships that ran aground near his property the previous January. George Warleggan, a business rival and enemy, in the process of building and consolidating a growing wealth and influence based on interests in banking, mining, and land, feels certain that, at long last, he will soon be rid of the "Poldark presence", which goes back several generations in Cornwall. By contrast, the Warleggans are sly and cunning up-and-comers anxious to place their humble origins fall behind them.

Ross, over the previous year, has found himself mired in tragedy and mixed fortunes, due to the death of his first-born Julia and the failure of a mining venture in which he had invested a great deal of money. This causes strains in his relationship with Demelza, his wife. Demelza is one of the most unique characters I've ever come across in any novel I've read. A woman of humble status who through marriage earned the right to be regarded as a proper lady, Demelza is loving, generous of heart, resilient, and one of her husband's biggest defenders. To that end, she travels to Bodmin to visit one of the area's influential propertied men (Sir John Trevaunance) for help in providing good character references for her husband in court. Not an easy task. France is convulsed in revolution and any act or gesture in England that suggests common cause with the revolutionaries in Paris is regarded as threats to national security. So, it looks that Ross's life may soon be forfeit upon resolution of his case.

[Ross] "... thought: Were beauty under twenty locks kept fast... If she went to London or Bath she'd have half the aristocracy at her feet. Instead she's immured here, in an ancient house and with a bankrupt husband, doing half her own work. It must be galling to her to feel her life's slipping away. She was twenty-six last birthday. Perhaps that's the reason for the change. But it's a change towards me.
'What are you thinking of, Ross?'
'Um? Oh, about the rain. The Mellingey will be in flood very soon.'

What would have happened, he thought, if she'd married me ?[Ross is thinking of Elizabeth Chynoweth, the great love of his life, who married his cousin Francis while Ross was in America, where it had been presumed he had died fighting for King and Country] Would events have been very different? We're the slaves of our characters: would I have been happier, or she? Perhaps there are elements in her nature and mine which would have made our life together difficult.

And what of this young woman [Demelza] beside him, whom he had loved devotedly for four years and still did love? She had given him more than perhaps Elizabeth ever could: months of unflawed relationship, unquestioning trust (which he was now betraying in thought). Oh, nonsense. What man did not at some time or another glance elsewhere; and who could complain if it remained at a glance? (Chance was a fine thing.) And if there had been a cooling between him and Demelza, hers had been the first move, not his."


All in all, this is a richly layered novel --- full of surprises ---which I invite the reader of this review to peruse at his/her leisure. You'll be glad that you did.
Tweet