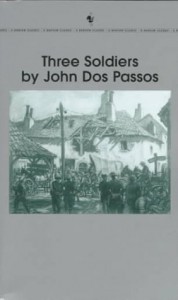 "Three Soldiers" is one of the earliest novels to come out of the First World War to express the disgust and disillusionment felt by many Americans who had participated in it.

Dos Passos (who had served as an ambulance driver in Italy during the war) introduces the reader to 3 distinctive characters who are representative of America's diversity. First, there's Chrisfield, an Indiana farmboy who's a bit rough round the edges and always spoiling for a fight. Second, there is Dan Fuselli, a first generation Italian-American from San Francisco who looks upon the Army as a gateway to a better life after the war. He goes out of his way to make himself useful to his superior officers in base camp (and later in France) in hopes of gaining advancement. Making sergeant is his ultimate dream, for an NCO (non-commissioned officer) is in a position to assert authority over the men in his charge. Third, comes John Andrews, a New Yorker by way of Virginia (where he spent his early life with his mother) and a Harvard graduate, too, who enters the Army as an idealist. He's excited about being part of a great crusade, as he sees it, to "make the world safe for democracy" and give Kaiser Bill a real butt-kickin'. The 3 men meet during basic training, which proves to be a dispiriting experience for all of them. The regimentation and discipline -- as well as contending with the Army bureaucracy and the general Army ethos --- weigh them down.

Fuselli is the first to be shipped to France. Dos Passos gives the reader a bird's eye view of Fuselli's departure from base camp to embarkation point on the East Coast, and the subsequent voyage to France. Reading these passages almost made me feel that I was on deck an overcrowded troopship, huddled in an Army trenchcoat for warmth, looking out over the ocean and wondering how many U-boats are lying in wait.

Once situated in France, Fuselli is chagrined to learn that, instead of being posted to a unit bound for the Front, he is, instead, posted to a rear-echelon medical unit. This doesn't sit well for him. But he bides his time currying favor with his superior officers. Eventually, his unit is called up in the wake of the German offensives of the spring and summer of 1918. But Fuselli allows himself to be talked into applying for reassigment to another unit (in staff headquarters) on the eve of departure for combat in hopes of receiving a permanent promotion to corporal. (By now, he had risen to the rank of private first class.)


Chrisfield and John Andrews are also sent to France, where each of them experience some combat in the late stages of the war. But what contrasts this book with Erich Maria Remarque's "ALL QUIET ON THE WESTERN FRONT", is that the reader gets no real sense of combat, of being on the frontlines. Dos Passos is much more interested in looking at the interior lives of the 3 men more than having them displayed as chess pieces on the battlefield. The novel is a polemic on what Dos Passos sees as the futility and absurdity of the First World War. What's more, in France, he focuses more on telling Andrews' story, so much so that most of the book is taken up with him. I won't say much more, for fear of giving away the gist of the story.

But I will say that "THREE SOLDIERS" made for much better reading than "A SOLDIER OF THE GREAT WAR", which I came to thoroughly hate for its verbosity and its main character's arrogance and pomposity.
Tweet