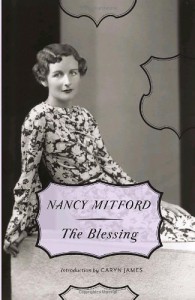 Grace Allingham, a young and unassuming Englishwoman from an affluent background, makes the acquaintance of Charles-Edouard de Valhubert, a French Air Force officer, during the early years of the Second World War. Charming, suave, and utterly self-assured, he sweeps Grace off her feet, they quickly marry and have a short honeymoon. Then Charles-Edouard goes back to the war. Grace leaves London and settles in the countryside. She finds herself with child and later gives birth to a boy, who is named Sigismond. Better known as "Sigi", we find him as a boy of seven (upon his father's return) with an angelic face and a puckish charm that leads him to do a little mischief every now and then.

A few years pass before Charles-Edouard receives his discharge and returns to Britain from the Far East. He returns to Grace and son like a force of nature, full of bonhomie. They relocate to France and what a life! Mitford gives the reader some interesting views into French culture and mores and offers some sparkling contrasts with the British mindset and contradictory/ambivalent views of the French.

In turns, "The Blessing" reads like a zany comedy of errors and a tender love story. I recommend it to any reader who is keen to read an entertaining and engaging novel.
Tweet