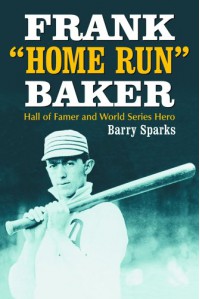 As a child, I fondly remember having a set of cards featuring some of major league baseball's greatest and unsung players. I loved learning their stats, which attested to their talent and skill. Batting average, RBIs (i.e. 'runs batted in'), runs scored, ERA & Ks ('earned run average' and [K ='strikeouts'] which apply to pitchers), and home runs. One of these cards featured John Franklin "Home Run" Baker. I scanned his stats, which aptly summed up his career. Impressive. But never did I give a thought to what the man, "Home Run" Baker, was like.

That is, until a couple of years ago, when I bought this book. I'm glad I did, because it gave me entree to a man, who, during the prime of his career as a third baseman with Connie Mack's Philadelphia A’s in the American League, became a nationwide sports hero. Through keeping in shape on his farm in his beloved State of Maryland during the off-season and perfecting his skills as a third baseman and hitter, Baker helped to make the A’s into one of the earliest baseball dynasties during the 1910s. Baker himself earned the sobriquet “Home Run Baker” as a 4-time home run champion and from being the first major leaguer to hit 2 home runs in a World Series game in 1911.

The arc of Baker’s major league career spanned the Deadball Era (1900-20) --- when the baseball was heavier, games were generally played with a single ball (which pitchers were free to ‘enhance’ with their spit --- often mixed with tobacco juice --- and scuffing as a way of giving them an advantage over opposing batters; this practice was outlawed in the 1920s; nowadays, major league baseball games are played with a plethora of balls), pitchers dominated the game, and the tactics of ‘hit and run’ (which were so well used by star players like Ty Cobb, Nap Lajoie, Eddie Collins, and Honus Wagner) were the norm --- and the coming of “Babe” Ruth as a home run hitter nonpareil in the 1920s. Reading this book gave me a better appreciation for players like Baker who helped make baseball the national pastime during the first half of the 20th century.