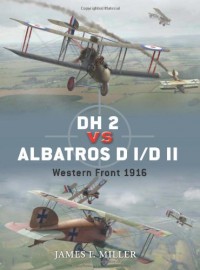 As befits any book of the "Duel" Series, Osprey has done a fine job of outlining in this book the characteristics of both the DH 2 and Albatros DI/DII fighters, which fought against each other over the Western Front from late August to December 1916.

The DH 2 fighter had been developed by the British to wrest aerial supremacy from the Germans, who, with their Fokker E-series monoplane fighters (which boasted a synchronized, forward-firing machine gun) had given British 2-seater reconnaisance aircraft a serious drubbing during the summer and fall of 1915. Entering combat in February 1916, by the time of the Battle of the Somme that summer, the DH 2 had been instrumental in winning back control of the skies over the front for the Royal Flying Corps (RFC). Faster in the climb and in level speed, the DH 2 had the measure of the Fokkers.

Then, in late August 1916, the Germans introduced the Albatros DI/DII fighters, which proved faster than the DH 2, more rugged, and boasting 2 forward-firing machine guns synchronized to fire through the propeller arc. This, coupled with the simultaneous development of the Jagdstaffeln (fighter squadrons) and the example and leadership of Germany's premiere fighter ace and tactician Oswald Boelcke, won back for Germany the aerial supremacy that it would maintain over the Western Front til the summer of 1917.

All in all, this was a fantastic, highly informative book. I highly recommend it to any WWI aviation enthusiast.
Tweet