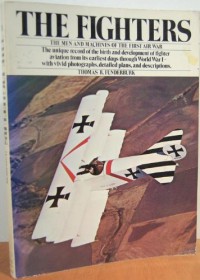 Many years ago, during the course of a family trip to Lake Buena Vista (Florida), I bought this book and became enthralled with its content.

Here are the stories of the airmen and aircraft which came into their own during the First World War. At the war's outset, aircraft were largely regarded by the opposing armies as vehicles for gathering intelligence from the sky and used as such. Indeed, it was the sighting of German troops nearing Paris by aircraft of Britain's Royal Flying Corps (RFC) that played a crucial role in the Allied victory in the First Battle of the Marne in September 1914.

As the war progressed, means were devised, at times in an ad hoc fashion, to develop countermeasures against these reconnaissance aircraft. Thus, by degrees, the fighter plane was developed and perfected.

"THE FIGHTERS" offers a fascinating look, through eyewitness accounts, photographs, a detailed map of the Western Front, and aircraft diagrams, a fairly comprehensive look at how military aviation evolved and was used between 1914 and 1918. I absolutely LOVED this book, because it stimulated my interest in First World War aviation.
Tweet