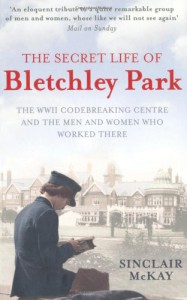 Bletchley Park -- described as an "idiosyncratic" Victorian house set on 55 acres situated halfway between London and Birmingham --- served during the Second World War as Britain's nerve center for the breaking and deciphering of the German Enigma codes.

In reading this story, the reader learns about the unique set of men and women -- military, civilian, university educated, debutantes, and some of the most brilliant minds ever brought together for one noble, overarching, salutary objective --- whose work (kept under a veil of absolute secrecy for 30 years) was crucial in ensuring Allied victory. Indeed, General Eisenhower maintained that, thanks to Bletchley Park's supply of intelligence (i.e. "Ultra"), the war was shortened by 2 years.

What many of us now take for granted about the general narrative of the Second World War would likely have spelled out an altogether different, sadder outcome for all the world without the work performed at Bletchley Park by people like the mathematician John Herivel, who had a Eureka moment in February 1940 that led to a breakthrough in the understanding of Enigma and its setup which facilitated a more systematic breaking of the German codes; Mavis Batey, whose work as a codebreaker played a vital code in the Royal Navy's resounding victory over the Italian fleet in the 1941 Battle of Cape Matapan; and Alan Turing, whose genius in devising the bombe machine and more advanced codebreaking machines (along with Dr. Thomas Flowers, an engineer by training who came from a modest, working-class background in London's East End) used at Bletchley Park anticipated the development of the modern computer.

To date, this is the best book that I've read about Bletchley Park.
Tweet