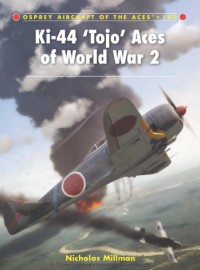 This book offers a concise and comprehensive history of one of Japan's most versatile fighter planes of the Second World War.

The Nakajima Type 2 heavy fighter --- better known as the Ki-44 "Tojo" --- represented a major departure from the lightweight, agile fighter planes the Japanese military preferred for dogfighting First World War style. Used extensively by the Japanese Army Air Force (JAAF) in China, Burma, the Philippines, and Japan, the Ki-44's hallmarks were its speed, rate-of-climb, and ability to absorb considerable battle damage. Yet, the Ki-44's combat debut in Malaya was somewhat less than stellar. Pilots complained about the plane's lack of manoeverability, lack of visibility from the cockpit, and its high landing speed. Eventually, as the Ki-44 underwent additional modifications and came into wider service, it proved to be a robust fighter, taking on the B-29 bomber streams as the U.S. Army Air Force (USAAF) carried out its systematic bombing campaign against Japan in 1944 and 1945.

Osprey has performed a valuable service in providing this book about the Ki-44, which has tended to be dismissed as a fighter plane with marginal ability. I recommend this book for any aviation aficionado, especially those with an interest in air combat during the Pacific War.
Tweet