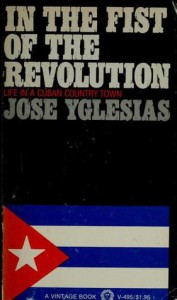 Yglesias, a Cuban American journalist who had grown up in Yuba City (a part of Greater Tampa, Florida), is given in February 1967, an opportunity, with the approval of Cuba's Ministry of Foreign Affairs, to travel through Cuba to see how the Revolution was impacting upon the ordinary campesino.

The impetus for this book began as an assignment for Yglesias from Pantheon Books "to write a book for their 'village' series, auspiciously begun by Jan Myrdal's 'Report from a Chinese Village' and followed up successfully by Stud Terkel's 'Division Street: America'."

Yglesias begins his odyssey near the northeastern coast of Cuba, living among and ingratiating himself with the people that he met. The stories and conversations in this book give the feeling that the author has, in effect, made himself Cuban, and yet with the foreigner's perspective, is able to give the reader a snapshot of a nation struggling to remake itself and forge a more egalitarian society. I finished this book with a sense of wanting to know Cuba myself.