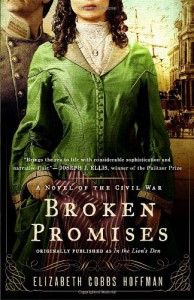 This is a very interesting Civil War novel, which, unlike most other novels of the genre which tend to focus on the battlefronts, sheds light on the diplomatic side of the war, vis-a-vis Great Britain and the U.S.

The author fleshes out with the skill of a Seurat pointillist, the real-life characters Charles Francis Adams, Sr. (son of John Quincy Adams, the 6th President of the U.S., and grandson of one of the nation's Founding Fathers, John Adams), whom Lincoln appointed shortly before war broke out as the American Minister to Britain; Henry Adams, Charles Francis' son, who accompanied him to Britain and served as an aide for his father; Thomas Haines Dudley, the U.S. consul in Liverpool; and several members of the British government and diplomatic community (e.g. The Foreign Secretary Lord John Russell and the Russian Ambassador to Britain, Baron de Brunnow). Justaposed with these personages are 2 fictional characters: Baxter Sams, a Virginian and Harvard classmate of Henry Adams who was studying medicine in England, and Julia Birch, a well-born 20-something Englishwoman, whose father made no bones about his financial support for the Confederacy and contempt for Americans in general.

The novel was easily readable and offered the reader views of how the Civil War was regarded within Britain, the growing relationship between Baxter and Julia (which weathered a storm of challenges), and the harsh treatment often meted out in Northern prison camps to Confederate POWs. (The South, too, could be inhumane in its treatment of Union prisoners, as was evidenced by the notorious Andersonville prison in Georgia.)

All in all, I enjoyed this novel, which made me think more deeply about Britain's barely veiled financial and material aid to the Confederacy during the early years of the Civil War. Previously, I had not been aware of the full extent of this unofficial British support.