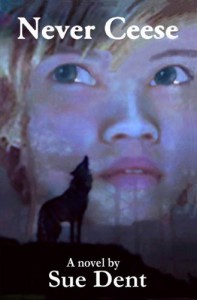 This book offers a lot of surprises and interesting angles on vampiricism and lycanthropy. The wife of a minister in early 19th century Wales is working in the garden of her home one day when she is accosted by a man who rapes her and subsequently takes on the form of a wolf before her eyes and assaults her. She is left terribly shaken up and for some time, cannot bring herself to tell her husband (who was away at the time of the attack) what had happened to her for fear of losing her husband. Eventually, she tells him everything and discovers that she is pregnant. Her husband assures her that the child would be treated as if it were their child, along with their other children.


Fast forward 200 years later. A large she-wolf has separated herself from a pack and struggles in the fading night to reach the crest of a hill, where she lets out a plaintive howl. Slowly, thoughts that had been lost or long suppressed press themselves upon her mind. As dawn emerges across the horizon, fur slowly retracts from her body, which stretches and contorts until the wolf assumes the body of a young, dirtied, nude woman. Unsteadily, she rises to her feet, laps water from a nearby stream, and after some searching, comes across some clothing on a clothesline. She remembers now the necessity for clothes. She walks across a wide swath of land towards a house which dominates the scene.

In this house are an old woman (Penny) and a vampire (Richard) who owns the estate on which the house sits. Richard lives a comfortable life with Penny, and dotes on her. He has lived so long that he has largely forgotten what life and family were like before he was cursed. Richard is a survivor fully at home in a 21st century world. The young woman knocks on the door and is admitted by Penny, who apparently knows her because the woman is instantly at ease in her presence. Richard she doesn’t trust at all and lunges at him, snarling with bared fangs (barely controlling the wolf within), leaving him with some nasty, bloody wounds. Penny explains that she mentally called the woman (Ceese) to come to their home because she believes that Ceese and Richard need each other. But both are very wary of each other. After all, vampires and werewolves don’t normally get along.


As the story proceeds, we learn that Penny has cancer and not long to live. Before dying, she extracts from Richard a promise to support and help Ceese. We learn that Ceese, too, is living under a curse, and longs to be free of it, so that she can be with her family in Heaven. Eventually, Ceese (who also has some psychic powers) and Richard develop an uneasy relationship and undertake a trip to New York, where Penny’s granddaughter has offered to help both of them find a cure for their respective curses.

The reader will find this a rich and absorbing story, full of twists and turns, with a surprising outcome.