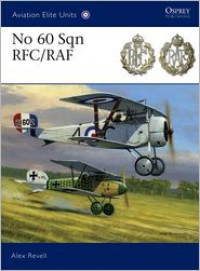 For the past decade and a half, Osprey Publishing has established a fine reputation for its aviation books on the air aces and units which distinguished themselves in aerial combat in various conflicts over the past century. This particular book is a prime example of the high quality research, photographs, and illustrations Osprey readers have come to expect. The reader is treated to a comprehensive history of No. 60 Squadron, which began service with the Royal Flying Corps (RFC) on the Western Front in the late spring of 1916.

Unfortunately, No. 60 got off to a rather rocky start during the Battle of the Somme, sustaining heavy casualties. It was withdrawn from operations for a time and had its obsolescent Morane aircraft replaced with the sturdy and manoeuvrable Nieuport 17 fighter. By the summer of 1917, several pilots who had been with or were still in service with No. 60 Squadron had made names for themselves. Albert Ball, who scored the bulk of his victories with No. 60 in 1916, became the top RFC fighter ace before he was killed in May 1917 (by which time, he was commanding No. 56 Squadron). Then there was Billy Bishop, a Canadian, who scored over 40 victories flying the Nieuport between March and August 1917, when he was posted away from the unit for a rest back home. By that time, No. 60 Squadron had been re-equipped with the SE 5/5A fighter, which proved to be one of the top fighters of the war, renowned for its speed, hitting power, high altitude performance, and ruggedness.

This book provides a thorough and highly readable history of No. 60 Squadron, who, by the end of the war in November 1918, had achieved more than 320 victories in air-to-air combat. For all of its 128 pages, I learned so much about No. 60 Squadron than might have been the case with a much heavier tome. Osprey has produced another winner.