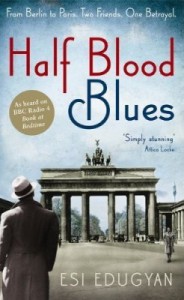 I just finished this novel a little less than 5 minutes ago, and all I could do was hold my breath at its denouement.

The 2 main characters throughout the story are Charles C. Jones (better known as "Chip") and Sidney Griffiths ("Sid"), both African Americans, who met on the cusp of adolescence in Baltimore and later went over to Germany in the late 1920s to play jazz. Theirs was often a contentious, sparring kind of relationship that was kept strong by their common love for jazz.

The story alternates in time between the years Chip and Sid spent in Europe (the novel's focus here spans from August 1939 to June 1940) and 1992, when both men --- now in their 80s --- return to Germany to take part in a film retrospective/discussion about one of their former bandmates, a dark-skinned Afro-German, Hieronymous Falk ("Hiero"), a jazz trumpeter in his late teens and a star in the making by virtue of his prodigious talent.

Sid and Chip had found it increasingly difficult to ekk out a living playing the music they loved in 1930s Germany, because the Nazis had branded jazz as "degenerate" and harshly suppressed it. Hieronymous was made a stateless person by virtue of his color. On the eve of war, their band broke up. But with the help of one of their bandmates (whose father was a wealthy industrialist), Sid, Chip, and Hiero were able to escape from Berlin to Hamburg, and into France. Paris proves to be a temporary haven for them (as well as Delilah, who was key to their gaining entrance to France) because by the following spring, the war rudely enters into their lives. All must flee. Hiero is abandoned and picked up by the Germans. Years later, back in Europe, one of the 2 former jazzmen finds himself compelled to face his guilt and seek atonement.