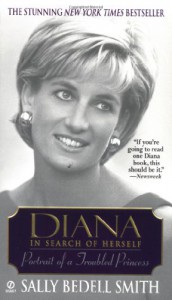 Reading this book made me realize that, as much as I admired and adored Princess Diana, how little I knew about the real Princess of Wales.

No matter all the press I read about Diana during her lifetime, this book --- which is replete with quotes and attributions from many of Diana's friends, detractors, and associates whom the author interviewed --- has brought home to me how deeply troubled and conflicted Diana was about herself and her relationship to the world around her. Yet, in spite of all that, here was a woman who --- by the example she sought to establish, first, through her position within the royal family while married to Prince Charles, and later, following her separation and divorce, her role as an all-around humanitarian --- made a profoundly positive difference in the lives of so many people the world over.

Charisma, in a person with genuine compassion and great beauty, can be a winning asset when it inspires others to give love and support to the less fortunate among us.

Princess Diana proved to be one of those rare, transcendental personalities, who, during the course of her life, through her public profile and example, appealed so winningly to the better angels of our nature.
Tweet