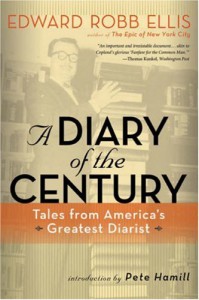 Ellis began work as a journalist in the 1930s in New Orleans, "covering Huey Long, Louis Armstrong, as well as the city's hungry workers, and the colorful French Quarter."

Later in the decade, Ellis moved on to Oklahoma City, where he covered stories on "the Depression, dust storms, and [First Lady] Eleanor Roosevelt." Then, he went to work for a newspaper in Peoria at the beginning of the Second World War.

Ever the journeyman journalist, Ellis moved on to Chicago, where he worked as a features writer for the United Press.

Following service in the Navy, Ellis eventually wound up in New York, where he would live and work from 1947 until his death 51 years later.

The best part about this diary is that the reader is not only given entree to Ellis' quest for greater understanding of self and environment, as well as his encounters with some of the notable figures of the last century. But also the reader becomes a witness to the profound changes that took place in American social and cultural norms throughout Ellis' long and remarkable life.