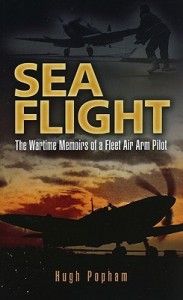 The author, through a skillful economy of words, relates his experiences as a fighter pilot in Britain's Fleet Air Arm through 5 years of war.

The Fleet Air Arm, which was detached from the Royal Air Force in the late 1930s, entered the war with several handicaps. One of which was a paucity of quality aircraft. As the war went on and the Fleet Air Arm expanded and was tested in a variety of battles from the Mediterranean (Taranto and Malta) to the Atlantic, the Arctic Ocean, and the Far East, it developed into an invaluable tool in the Allies' efforts to check and defeat the Axis Powers.

Popham's experiences in the Far East, Madagascar, and in the Mediterranean are lllustrative of what the Fleet Air Arm accomplished. He writes with understatement, which nevertheless succeeds in giving the reader a clear view of how the war shaped him.
Tweet