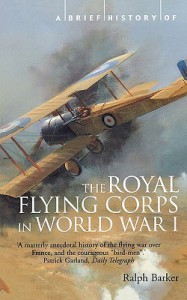 This book is AN ABSOLUTE GEM for anyone with even the slightest interest in First World War aviation.

Ralph Barker has written a highly readable and comprehensive account of the development of Britain's Royal Flying Corps (RFC) between August 1914 and March 1918. From the first pages, the reader is made witness to the growing pains of an air arm which, from the onset of war, worked mightily to fulfil the roles given to it by the British Army in France. Whether it was in the areas of reconnaissance, artillery spotting, bombing, and later in the role of achieving aerial supremacy over the battlefield and beyond the lines, the RFC adapted itself well, and in the process, laid the groundwork for the establishment of the world's first independent air force, the Royal Air Force, on April 1, 1918.

This is not a dry history. Mr. Barker also provides through letters and diaries, vivid and poignant accounts from the pilots, observers, and ground crews themselves into what the war was like for them. Thus, the reader is given a full scope into the history and personalities who shaped the RFC. Highly recommended.