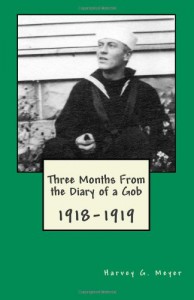 This book is a result of the efforts of a family who recently uncovered a diary once kept by their grandfather, Harvey G. Meyer. Meyer had joined the U.S. Navy during the First World War. But he was fated not to see active service, as he was still in training at the time of the Armistice in November 1918. Meyer was then given the option of continuing his training with the Merchant Marine at this time.

Imbued with a curiosity and keen sense of adventure, Mayer is assigned to a ship in Baltimore in January 1919 taking on coal to transport to Buenos Aires, Argentina. He and 2 of his navy buddies proceed by train from New York to Baltimore, where, as Meyer notes in his diary, they are given the opportunity to gain some acquaintance of the city and also make a brief sight-seeing excursion to Washington DC and Mount Vernon.

Meyer goes on to describe some of the experiences he had on the high seas as the ship on which he served (the S.S. Waukesha) makes its way to Buenos Aires (with a brief stop in Barbados). While in Argentina, Meyer shows a lively interest in the business climate there and many of the local customs. Americans are largely a novelty to the Argentines, he finds. The impression the reader has is of a world reawakening itself to life and peacetime commerce after a world war which had put Argentina in an economic slump since most of its trade (based on exports) had all but dried up.

For any reader who likes to read about the lives of people who lived in distant eras and had unique life experiences, I recommend this book. Photos taken by Meyer during the 3 months covered in the diary are also included.

++++++++++++++++++++
By the way, "GOB" was an American slang word in the second decade of the 20th century which carried a reference to the sea. Should one wish to know its precise meaning, one is strongly urged to read this book.
Tweet