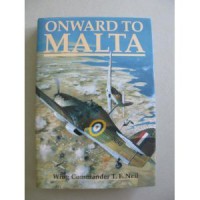 This book is the author's account of his experiences as an RAF fighter pilot on the island of Malta between May and November 1941, a time in which the Germans and Italian air forces dominated the Mediterranean and set themselves to neutralizing Malta. (Malta was key to Britain's hopes of staying in the war and defeating the Axis Powers in North Africa.)

Neil shows himself to be a skilled writer and conveys well the dangers and perils he faced while flying an obsolescent fighter (the Hawker Hurricane) against overwhelming enemy forces. He also brings alive to the reader what everyday life in Malta was like at that time as its people endured daily bombing raids and faced near starvation.

Remarkably, Neil survived a number of close calls and by the time of his departure from the island, was one of the few survivors from his squadron (who had come out to Malta in May 1941) to return to Britain.
Tweet