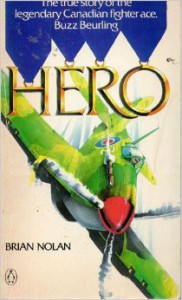 I purchased this book in May 1983 when I was visiting Toronto with a buddy of mine from high school. We had just finished our freshman year of college and welcomed a change of scene for a break. He preferred Chicago, but I wanted to go to Toronto. Happily, I won out and we had a fun time there. (To this day, Toronto remains one of my favorite cities to visit.)

The book is a biography of Canada's premiere fighter ace of the Second World War. Beginning his service in the Royal Air Force (RAF) in 1941, George Beurling, a bit of a loner wholly devoted to developing his skills as a fighter pilot, found it difficult to adapt himself to the accepted discipline so essential to working well in a squadron tasked with flying combat over Western Europe. But, when Beurling volunteered for combat service in Malta (arriving there in the early summer of 1942 when the island was under siege from both the Luftwaffe and Regia Aeronautica), he came into his own as a fighter pilot. Within 4 months, he was credited with shooting down 28 enemy planes and enjoyed a reputation as a top pilot and superb shot.

Beurling survived the war. But his life was cut short when he died in an air crash in 1948, aged 26
Tweet