Per Ardua ad Astra (Through Adversity to the Stars) 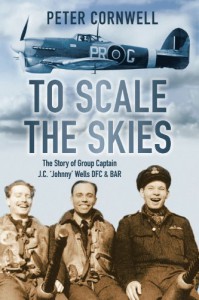 In marked contrast to a previous aviator biography about an American fighter ace that I read earlier this year, "To Scale the Skies" was very well-written and a delight to read, clearly showing the love and respect the author had developed for his subject --- Group Captain J.C. "Johnny" Wells --- while researching Wells' life and career. Wells, born in 1912 (the youngest of 3 children) on the north Norfolk coast of Britain, grew up in a close-knit community. His father was a fisherman who struggled to find steady work for himself and later abandoned Wells and his family for another woman, with whom he had a second family.

Wells at 15 applied for a position in the Royal Air Force's (RAF) Apprenticeship Program, which trained young men in the technical trades essential to the RAF. Of the 500 applicants who applied for the program, 200 passed the exam. Wells rated at 103. Thus began an Air Force career that spanned from the late 1920s (when the biplane was still very much in vogue) to the dawn of the jet age in the late 1950s.

From mechanic to air gunner, Wells qualified for pilot training in 1934 and a year later had earned his wings. Shortly thereafter, he was posted overseas to the Middle East, where he saw extensive service in Egypt and Palestine. By the time war broke out in 1939, he was back in Britain, serving as a flight instructor until the spring of 1942, when (after clamoring several times for combat duty) he underwent specialized training as a fighter pilot and went on to serve with one of the pioneering fighter-bomber/ground attack units in the RAF (No. 609 Squadron, which had previously flown Spitfires), flying the Hawker Typhoon, helping to iron out many of the bugs which threatened to have it taken out of service. Wells went on to have a distinguished combat record and after the war served in a number of administrative and active service roles in Libya, Germany, France, and Iraq.

The book also has several photos from Wells' personal collection which give the reader a palpable sense of how much military aviation progressed throughout his career. I recommend this book to anyone who enjoys reading biographies of people who arose from humble origins to fulfill their ambitions and dreams.