PORTRAIT OF A GREAT CITY AT THE CROSSROADS 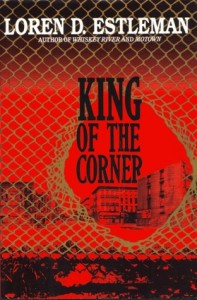 Once again, the City of Detroit takes center stage in a novel replete with themes of crime, violence, power plays among the powers-that-be, drug lords, and the police, and the everyday struggles of ordinary people (young and old) to survive and thrive.

The year is 1990 and a onetime star pitcher for the Detroit Tigers is released from prison, where he had served 7 years for having a party at a high class downtown hotel, where a young lady was given cocaine and later died from an overdose. "Doc" (Kevin) Rivers, the erstwhile pitcher, goes to stay with his older brother and his family in Dearborn, a city closely adjacent to Detroit. He's a big, imposing man trying to make a new start for himself. Through his brother, Doc has a job working in a John Deere dealership, where he fulfils a utility role, taking on any job given to him. Yet, Doc is a bit restless. So, when a colleague at John Deere who has a side job operating his own cab service offers him the opportunity to earn a little money while he's away on holiday, Doc seizes upon it.

Well, Doc soon finds himself with an interesting character for a client while driving one night around Downtown Detroit. His name: Maynard Ance, a disbarred lawyer in his 60s with a rather dodgy reputation now working as a bail bondsman. The 2 strike up a conversation and Ance offers him a job as his driver and assistant. In other words, his "muscle." Doc is intrigued and before he knows it, he takes Ance to a hotel where Ance sought to apprehend an ex-fugitive (and former '60s revolutionary) and collect on some money due him for his efforts. Unfortunately, Ance won't collect because he and Doc find his quarry dead in bed from a gunshot wound to the head. A suicide.

More thrills and chills follow. Estleman knows how to make a story that is fast-paced, exciting and with a variety of characters whose imprint stays with the reader long after they've had their hour upon the stage.

There is never a dull moment in this book. Read it, be entertained, and learn something about the heart and soul of Detroit in the late 20th century.